Tosamaidan is a high-altitude landscape of undulating meadows slowly rising to the height of 10,000 feet (Stein 1899). It is made of three prominent meadows: Pathra, Guttemarg and Badshamarg. Bounded by dense forests, primarily of fir, pine and deodar trees and snow-capped peaks, with silvery snake- like rivers running through them, the meadows are crucial pastures for the livestock of villages set at the base of the mountains.

Apart from being rich in flora, the area is also home to varied wild mammals like the Leopard cat, Jungle cat, Himalayan Black Bear, and Brown bear, and a large diversity of other fauna including bird species.

The meadow is situated about 10 km from Khag town of Budgam district at the foot of Pir Panjal range. Around 53 km from Srinagar city, Tosamaidan is the largest pasture in its surrounding areas, which is 3 miles in length and 1.5 miles in width and remains mostly covered in snow from November to April.

There are also several streams originating in Tosamaidan or neighbouring meadows flow into Sukhnag river. Tens of thousands of people in 3 districts downstream depend on this river for their survival. Many communities practicing pastoralism and farming (mainly paddy, maize, beans), including Gujjars, Bakarwals, Pohls, Paharis and Kashmiris, are substantially dependent on the meadows for their livelihoods and survival. Hundreds of families move with thousands of livestock into the area in summer and spend 3-4 months there before returning to their villages at the base of the hills. Apple and almond orchards are also a good source of income for these communities.

Despite its historical, ecological, economical and cultural importance, about 11,600 hectares of the Tosamaidan area was leased out to the Indian army in 1964 by the Jammu and Kashmir state government, for use as a firing range, and for conducting artillery drills.

This was followed by several decades of incidents adding up to a huge environmental and human cost. There was massive deforestation in Tikhal, Sitaharan and Drung and other areas. Being an environment enthusiast,  After enquiring with some active community members, it was told that partly it was by the army to make way for its operations and partly by community members as they had no other source of livelihood. As people came to know through the Forest Department that the land leased to the army was for 10 years which would end in 2014, they realised that it would be possible to seek an end of the firing range exercises with the support of local people.

The key local residents and a few from outside like Dr. Shaikh Ghulam Rasool, realising the seriousness of the issue felt the need for some form of organisation. Thus was born the Tosamaidan Bachao Front (TBF), on 12th August 2013.  This, however, was the culmination of a process that began 6 years earlier. From 2009 onwards, after filling multiple RTIs, gathering information on the social, ecological, economic and political aspects of Tosamaidan, work began towards collating and disseminating this information in a coherent form.

Eventually, all the efforts made by TBF paid off. In 2014, the state government issued an official statement stating that the lease will not be renewed. That November, Tosamaidan and its residents celebrated ‘Jashan-e- Tosamaidan’ , a festival that signifies and celebrates their struggle. Around 150,000 people gathered for the festival. It subsequently became an annual event.

2009- community members along with several local leaders started to collect information on social, economic, ecological and political aspects of Tosamaidan

Constant distress experienced by the people for decades over the use of heavy artillery on the land that was leased to the army as a practice range was a significant factor for people to organise themselves and understand the situation better. Apart from the accidental killings and mishaps due to the presence of unexploded shells, there were various ecological implications of the firing. Deforestation was one; damage to wild flora and fauna another.

The firing also affected the economic possibilities for the people. Tosamaidan is as or more beautiful than Gulmarg,  Pahalgam or Sonmarg according to the residents and hence, has enormous tourism opportunities. But the artillery firing range hindered such opportunities. So, there was a need to create awareness about the ecological, economic and social importance of conserving and protecting Tosamaidan which led to the process of collecting information regarding various facets  and then forming TBF.

Dr. Shaikh Ghulam Rasool, a government medical practitioner regularly visited Tosamaidan area as part of his beat, in the late 2000s. He noticed massive deforestation in Tikhal, Sitaharan and Drung and other areas. In order to understand the situation better, he filed multiple RTIs. Nazir Lone, a local youth, inspired by Dr. Shaikh also filed RTIs covering various issues such as information on casualties and injuries due to the firing range, contamination of water, what kind of ammunition was being used, and who was responsible for giving the lease.

This started a process of starting dialogues within the community that would culminate in the formation of TBF in 2013. However, even before collectivising under TBF, a number of meetings were organised with community members, local network groups and other stakeholders to create awareness on the ecological, economic and social importance of conserving and protecting Tosamaidan. Several sarpanches supported the movement. By mid-2013, there was a common consensus among the members that the process needs a forum that can take up the movement in a more consolidated manner.

The TBF members along with other local activists began the process of active mobilisation. They used varied means to mobilise people and create awareness amongst them.

However,  there has been limited participation of women in these processes. Though attempts have been made towards including women, yet none are part of TBF committees or key social leadership.

The TBF and every village took an oath called halafbardari, in which they promised to fight together, keeping aside their self-interest and political ideology, towards protecting Tosamaidan. A number of meetings were organised with community members, local network groups and other stakeholders to create awareness on the ecological, economic and social importance of conserving and protecting Tosamaidan.

They also resolved to follow a consultative process, put various perspectives on the table, and resolve any issue with dialogue. In all the 64 villages, meetings were conducted and the oath was read out aloud. A 30 member committee was formed in each panchayat which would take up organising of meetings and coordination of awareness activities in their area. Each sarpanch was responsible to coordinate meetings in their respective panchayats, and pass a resolution supporting the process and following its rules like being a peaceful, consultative, pro-people and ecological movement.

The movement also made it clear that it is not part of or affiliated with any political party. Financially, all the money required for TBF related activities was generated or donated by the local people and the activists involved in the movement. Whenever meetings happened in the villages, the respective village would take care of hosting the meetings and sometimes even for people’s travel.

TBF gave hope to people that through peaceful and democratic means it is possible to reclaim one’s rights and entitlements.

In areas where deforestation had taken place, community members with help from the Forest Department are now planting trees in an attempt to achieve some level of ecological restoration.

From the TBF process emerged an NGO called the School for Rural Development and Environment (SRDE), in Srinagar, set up in 2015 by Dr. Shaikh and his colleagues. The aim was to initiate documentation, research and advocacy on environment related issues in Kashmir, as these tend to get heavily ignored.

In the same year, SRDE and TBF came up with a plan for Community Driven Adventure and Rural Eco-Tourism (CDART), facilitated by Dr. Shaikh and colleagues like Lubna Sayed Qadri, and following multiple consultations at the village level including with women, disabled and local stakeholders including Paharis, Bakkarwalas and Kashmiris. The Eco-Tourism plan emanated from the principles of self-determination, localised income generation, ecological sustainability and inclusivity.

The plan was presented to the panchayats, which adopted it by resolution, declaring that through such a model “the deserved community will have control over its own natural resources; and the benefits of the said tourism model will reach all strata of the suffering communities” (Qadri 2018). It was then presented to the state government on 29th March 2016, at a meeting where heads of 14 state departments were present. In May 2016 the then Chief Minister Mehbooba Mufti announced that Tosamaidan would be dedicated to tourism run on the CDART model.

Dr. Shaikh and Nazir Lone used RTIs to obtain information on multiple issues relating to the Tosamaidan firing range, including key information on the duration and maturity of the lease, which the activists used to seek accountability from the State administration and further their work on reclaiming Tosamaidan. It also suggests that progressive, pro- people laws can play a crucial role in strengthening resistance and transformations on the ground.

The role of local leaders, activists, inspirers, supporters and individuals in the TBF process is also of crucial importance. Multiple people played important roles in identifying key local participants and forums of participation, providing technical/ legal help, supporting the process through facilitating dialogues and advocacy with the government, and helping with public and media outreach. The whole process powerfully brings out the voluntary spirit with which all people came together.

The forests of Tosamaidan area have been facing extensive destruction due to illicit lopping for road construction, rapid urbanisation, illegal felling by local people and fires. Similarly, the rich fauna is extensively threatened due to poaching, encroachment, deforestation, fires, climate change and other human caused destruction.

A part of this has been due to the presence of the army over several decades. A number of rivers and springs originating in Tosamaidan became poisonous, and people were afraid to drink their water; and even radiation was feared.There has also been a lot of pressure from the commercial tourism nexus but local pressure has ensured that it is kept out.

School for Rural Development and Environment (SRDE) in collaboration with TBF has been training local youth to be nature guides. Along with this, the idea is also to promote local crafts and arts, and to market such products when tourists come to this area in the future, or in markets outside. There is also a plan to include medicinal plants and fruit products as part of the livelihoods generation program.

References and Glossary
No Data
Bajpai, Shrishtee and Kothari, Ashish. 2020. Tosamaidan: A zone of peace and resilience in Kashmir (India). Kalpavriksh, Pune. 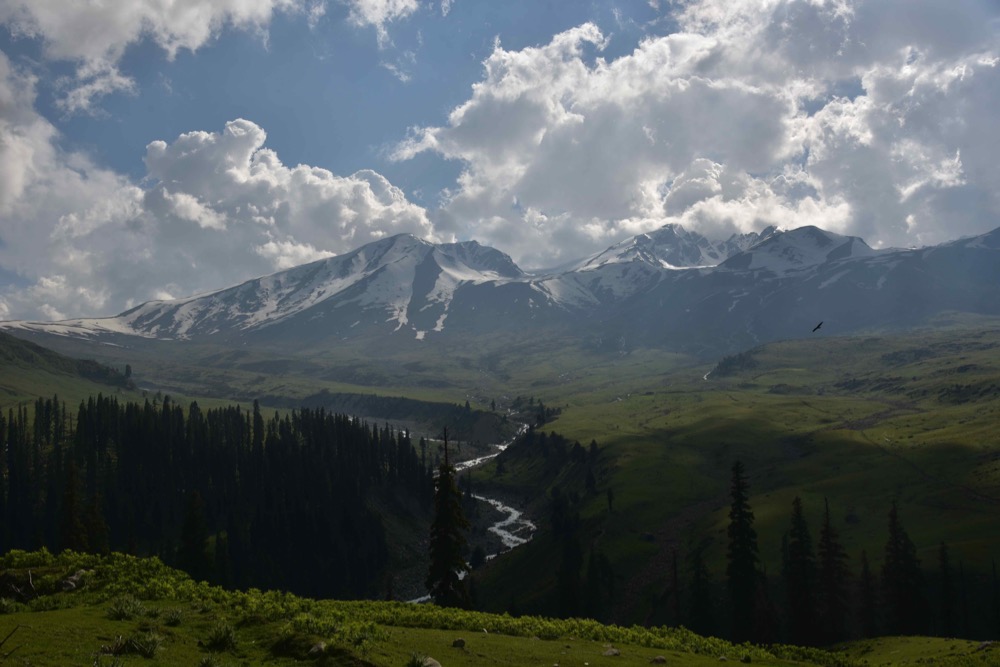 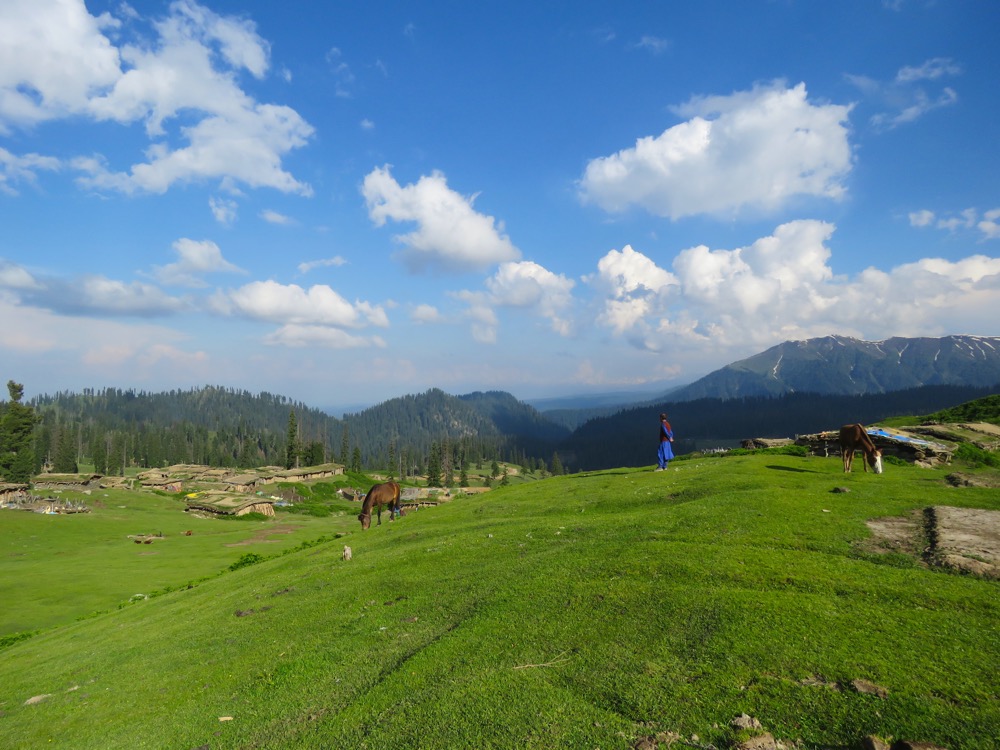 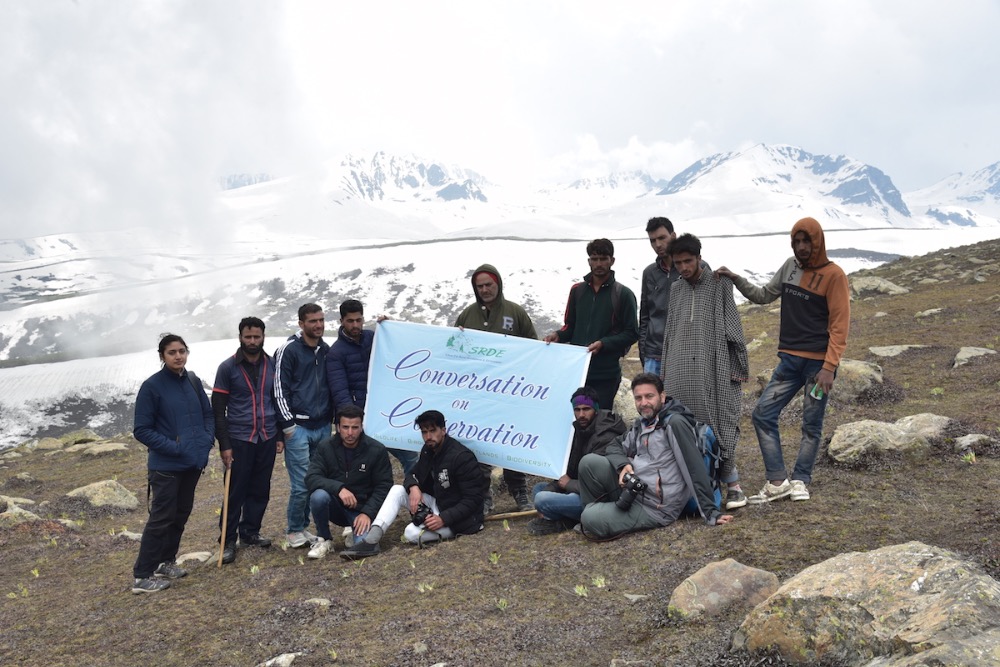